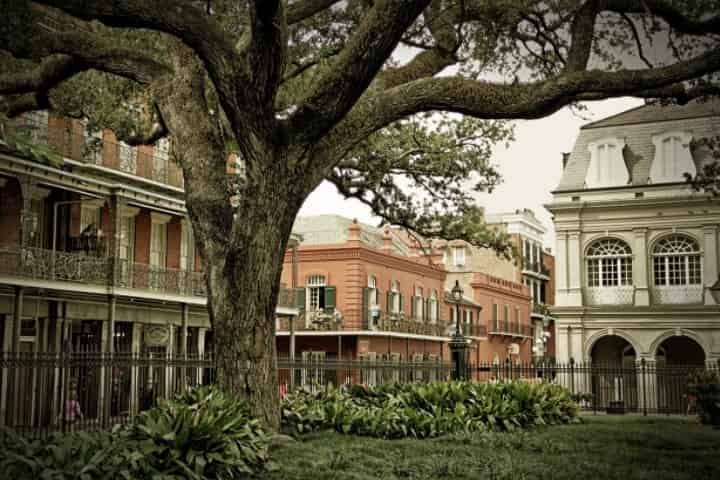 No matter if it’s your first time visiting New Orleans, or if you visit the French Quarter frequently, you know that the historic architecture is one of the many reasons why visitors love the city so much. If you’ve ever wanted to know a bit more about the French Quarter’s beloved architecture, you’ll enjoy these 10 fun facts.

1. Because of two major fires, the French Quarter is actually mostly Spanish Architecture. 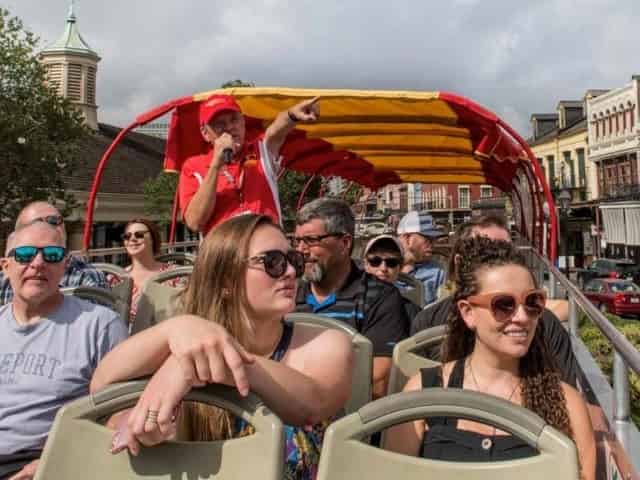 According to a recent Traveler Story, city tours are a great way to experience the amazing architecture of New Orleans

The French arrived at their swampy colony along the Mississippi River, and built many simple wooden houses and structures, many of which were raised due to the frequent flooding of the area prior to the levee. Two major fires during the Spanish occupation, 1788 and 1794, destroyed over 90% of the original buildings built by the French. Everything was rebuilt in Spanish style.

Madame John’s Legacy (1789), located at 632 Dumaine Street, is the only remaining example of French residential architecture left in the French Quarter. The original building burned in 1788, but was rebuilt the following year in the same style. This particular home would have housed a more affluent French family. Most other French-styled homes of the French Colonial era would have been smaller in size, built on the ground, with or without a porch or veranda.

2. The bright colors are very Caribbean. 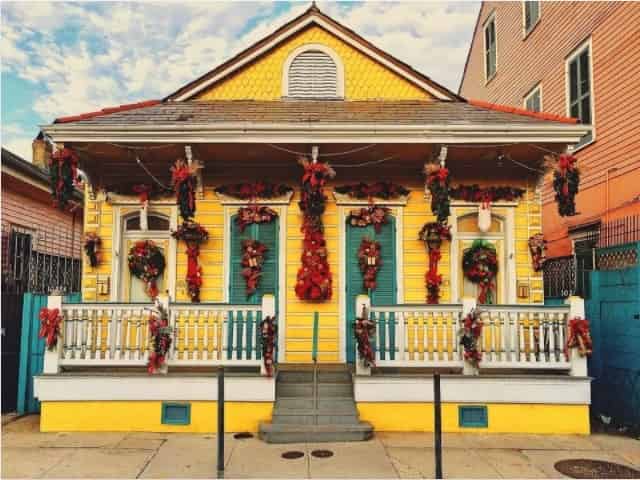 Pictured above is a Caribbean-inspired home in the French Quarter, decorated for the holidays

NOLA is referred to as the “Northernmost city in the Caribbean.” Before New Orleans was a successful New World venture, the French colonies in the Caribbean were much more profitable. Many of these newly freed slave rebels from Haiti sought the French-influence of Creole New Orleans as their new place to call home in the early 1800s.

This huge migration of newly freed people of color people bring with them voodoo, rum, and music, and culture. By 1809, half of the residents of New Orleans consisted of people formerly from Haiti, as a direct result of the Haitian Revolution. The vivid pinks, yellows, and blues seen on a New Orleans voodoo tour through the French Quarter are one of the direct influences from Haiti. 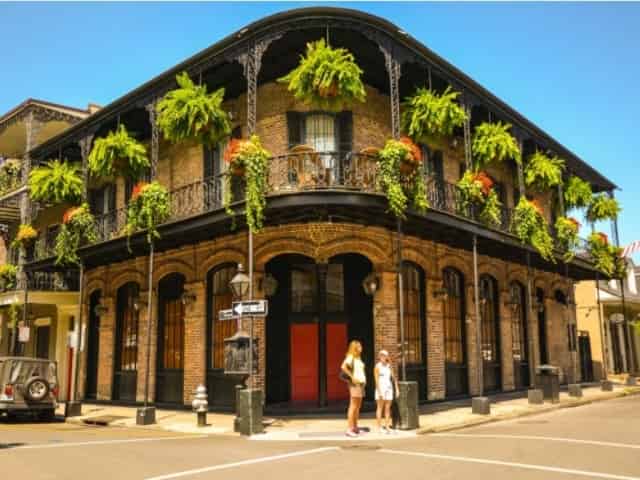 Ornate Spanish-inspired iron work, as pictured above, can be seen throughout the French Quarter

The use of ironwork did not appear in New Orleans until the city was rebuilt by the Spanish, who chose non-combustible materials to prevent the city from burning. The buildings were built in the brick between post - style, and then covered in stucco to protect the soft brick. The popular and practical use of courtyards and lovely archways in doors and windows are also very prominent examples of Spanish influence.

4. Any building built with exposed brick was built during the American occupation. 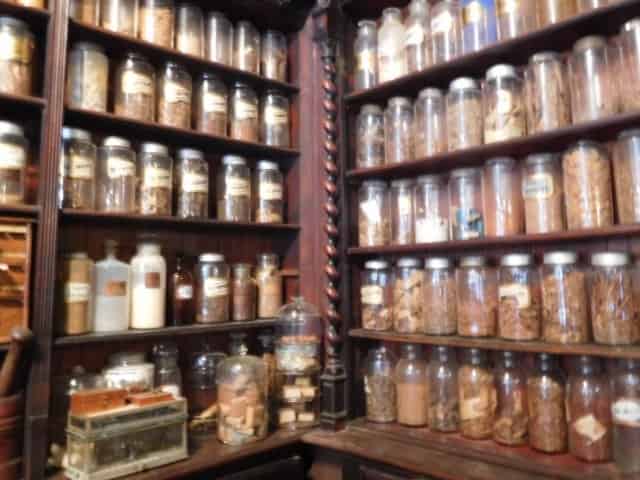 Pictured above is The Pharmacy Museum, which is known for its exposed brick courtyard, and a great way to see this for yourself is on a guided tour with New Orleans Ghost Adventures Tours

As Americans moved south into a Creole city consisting of mostly French, Spanish, and African people, they brought new building materials and built in their preferred styles. Bright red bricks were extremely costly and were shipped from the Northeast, allowing them to be a perfect way for Americans and Creoles to show off their wealth or identity.

It was a popular American style to have a red brick home, accented in white trim and green shutters. Examples of these popular exposed red brick buildings are The Pharmacy Museum and the Herma-Grima House Museum, both built for Americans.

5. The Pontalba Buildings in Jackson Square were the first sightings of cast ironwork in the city. 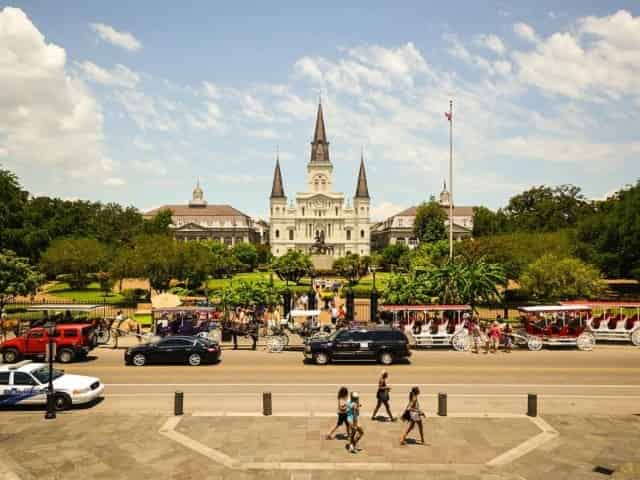 Pictured above is Jackson Square, known for its rich history, amazing architecture, and for being one of the best places to photograph in New Orleans

Designed and funded by a wealthy Creole woman, the Baroness Michaela Pontalba, the Pontalba Buildings in Jackson Square were inspired by the Place de Vogue in Parish, France, which consists of large multi-story brick townhouses with commercial space on the first floor, with elaborate galleries and balconies above which face a beautifully landscaped park complete with ornamental water fountains. With the Pontalba Buildings, she achieved just that on a much smaller scale.

Architectural experts in NOLA presume that these buildings and their custom cast iron galleries were the first example of cast iron work used on buildings in NOLA. Many existing buildings began to add new balconies and galleries, and the lacy ornamental cast ironwork was the new trend that everyone with status had to have. The Baroness is also responsible for the beautification of Jackson Square and improvements made upon the St. Louis Cathedral. Other great examples of ornamental cast ironwork nearby include the LaBranche Building and the Cornstalk Fence Hotel.

6. The oldest building in the Mississippi River Valley is the old Ursuline Convent. 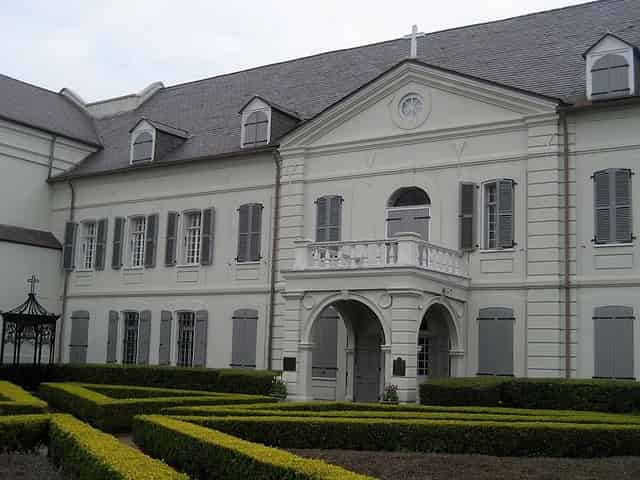 Pictured above is the Ursuline Convent, one of the top places to see on a spooky ghost tour through the French Quarter. Image from Wikimedia

The only example of truly French architecture that remains in New Orleans is the Ursuline Convent built in 1745 and located at 1100 Chartres Street. The pitched roof style, dormer windows, and use of shutters are all French-style architecture. This historic building survived both great fires, and is now a museum dedicated to its original residents, the Ursuline Nuns, and is one of the many French Quarter buildings believed to be haunted.

7. There is a distinct difference between balconies and galleries. 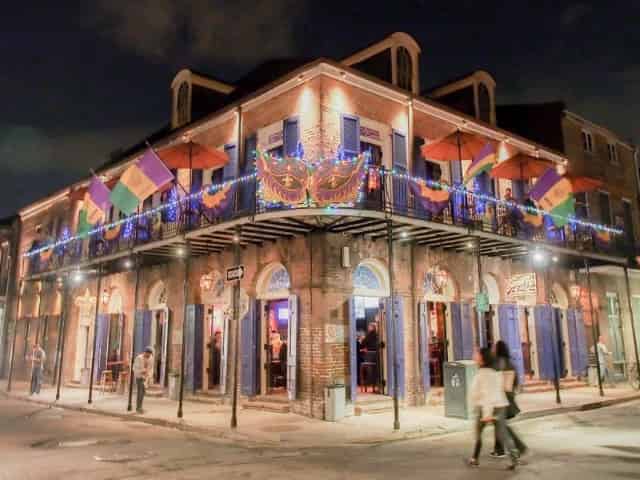 Both balconies and galleries added additional outdoor living space to your buildings, and allowed a way for its residents to show off and interact with those walking the streets. Not sure if it’s a balcony or a gallery? Here’s how to tell the difference:

8. One of NOLA’s most influential Creole architects also doubled as a pirate. 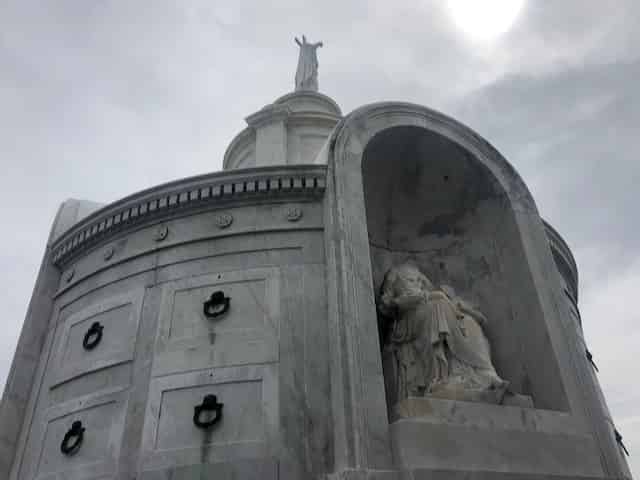 View the final resting place of this important New Orleans native, along with some incredible architecture, on a chilling cemetery tour in New Orleans

Barthelemy Lafon lived as a Creole architect and city planner, and also as a pirate and smuggler, throughout his life in New Orleans (1769-1820). He is responsible for the layout of the Garden District, named streets after Greek mythology, and is the reason there are so many gardens, fountains, and street lined streets Uptown. He’s also responsible for areas throughout the ByWater and Bayou St. John neighborhoods.

He was a well known philanthropist throughout his professional career, but after the Battle of New Orleans in 1815, he befriended the Lafitte Brothers and began a short career of piracy and smuggling, which ended in 1820 as Lafon fell victim to Yellow Fever. He is one of the many notable Creole buried in St. Louis Cemetery No. 1. A few French Quarter examples of his work are the:

9. The most common building types in the French Quarter include Creole Townhomes, Creole Cottages, and Shotgun Homes. 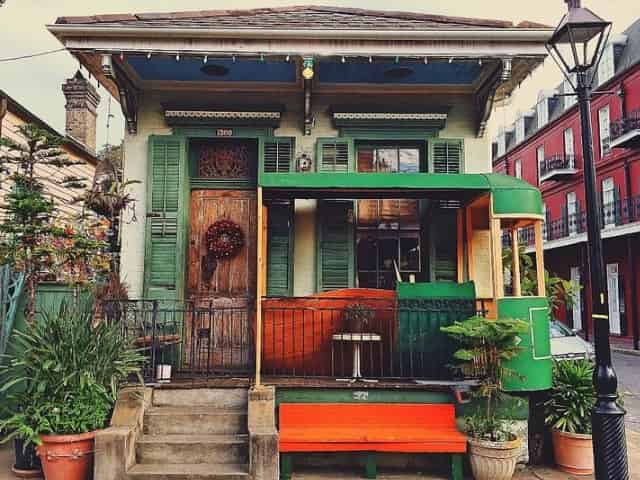 Take a guided walking tour through New Orleans, see Shotgun Homes like the one pictured above, and experience the local architecture up-close-and-personal

While there are many different building types in the French Quarter, there are a few that particularly stand out. Creole Townhomes, Creole Cottages, and Shotgun Homes are three popular architectural styles found in NOLA, and here’s how to tell them apart:

10. The French Quarter is considered a National Landmark. 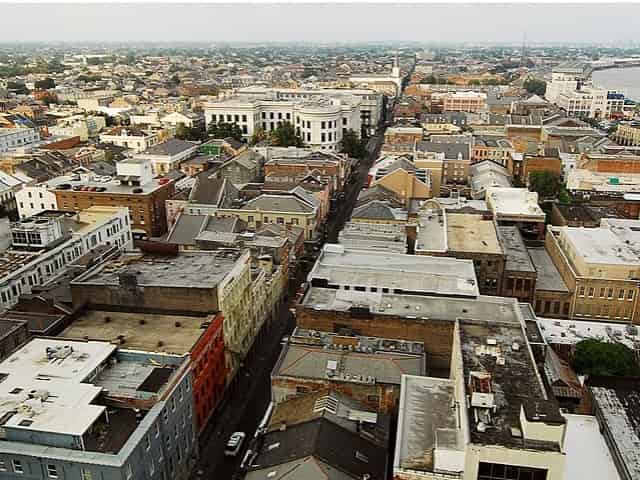 Aerial view of the French Quarter from Wikimedia

By the 1920s, the entire French Quarter had fallen into disrepair and was no longer considered a desirable place to live. A neighborhood association known as the Vieux Carre Commission was formed in the early 1937s to protect the French Quarter from being demolished and redeveloped. The City had plans to develop a raised riverfront highway along the Mississippi River, which thankfully received much opposition from many residents and the Vieux Carre Commission.

By 1965, the entire French Quarter was designated as a National Historic Landmark. Today, the Vieux Carre Commission governs the exteriors throughout the French Quarter, to keep the architectural aesthetics both original and authentic.
Note: “Vieux Carre`” translates to “Old Square” in French, and is another name used for the French Quarter.

Below are a few points of interest in Orleans Parish that are also listed on the National Register of Historic Places, for your architecture-viewing pleasure: