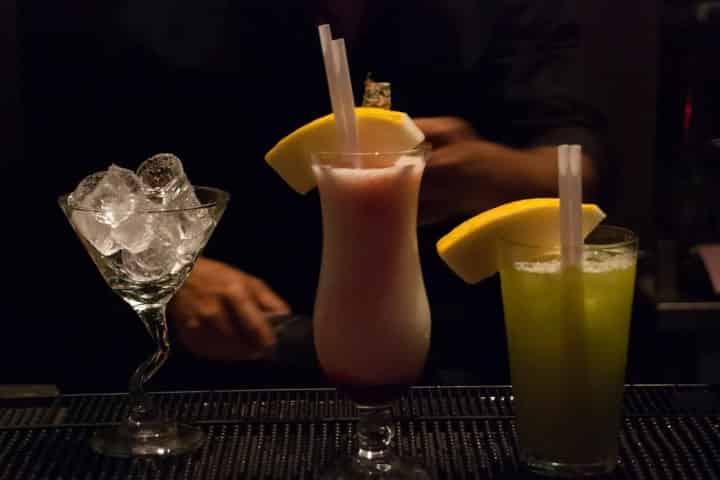 New Orleans’ Creole and Cajun recipes are recognized worldwide as some of the most innovative and delicious food creations. With so much tasty food, it’s easy to forget the vibrant history of these delectable New Orleans drinks and cocktails.

Alcoholic beverages dating as far back as the early 19th century are served at colorful and historically significant restaurants and bars throughout the city. Next time you’re in the Crescent City, take a break from sightseeing, relax, and sip on one of these 5 famous New Orleans drinks! 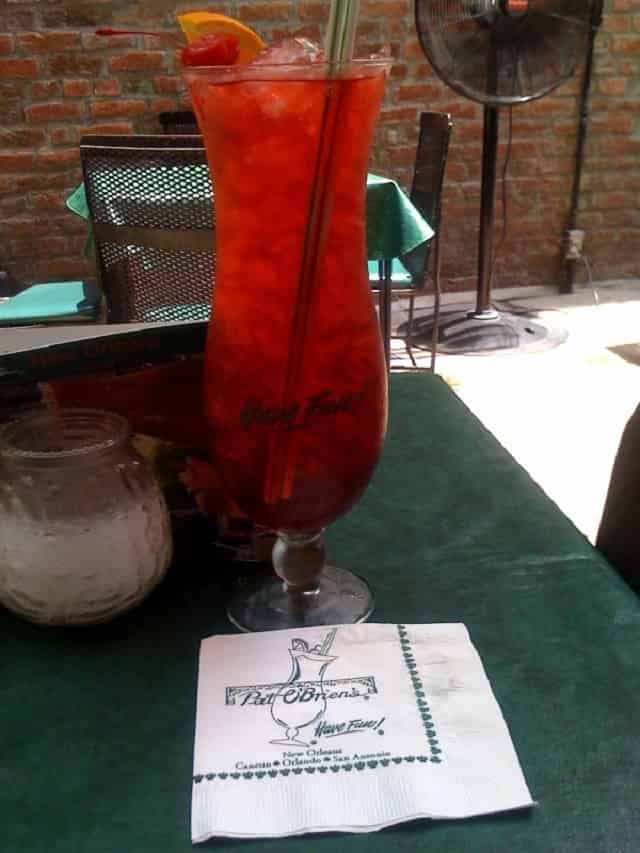 Pat O’Brien’s is one of the top spots to enjoy a Hurricane. Image courtesy of Wikipedia.

What is it?: As one of the most famous drinks to order in New Orleans, the Hurricane is a relative of the Daiquiri, typically composed of rum, fruit juice, and syrup or grenadine. Hurricanes are commonly served “on the rocks” in either Hurricane Lamp-shaped glasses, or plastic cups perfect for roaming Bourbon Street with drink in hand!

Where to get it: The top bar to enjoy a tropical hurricane is at Pat O’ Brien’s on St. Peters Street. Pat O’Brien’s is named after the creator of the Hurricane, Mr. Pat O’Brien. The tavern is located in a historical building dating back to 1791, and offers a must-see “dueling piano” show that has been a staple of the popular bar for decades, and is one of the top things to do in the French Quarter at night! 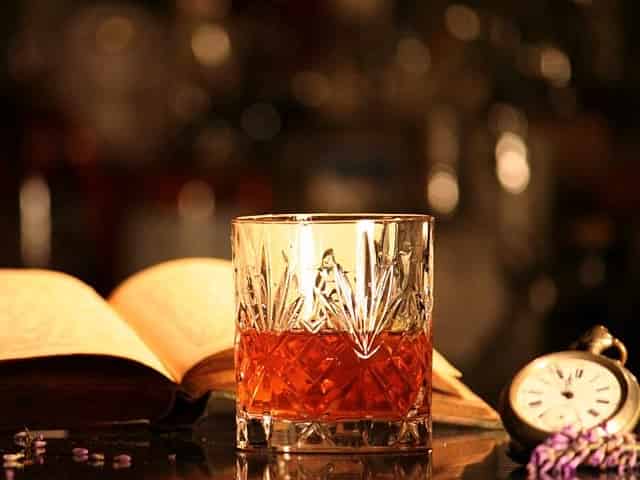 Sazerac is one of the oldest American cocktails. Image by wikimedia.org.

What is it?: Possibly the oldest American cocktail, the Sazerac is commonly a mixture of cognac or whiskey, absinthe, sugar, and Peychaud’s Bitters, and served straight up with a lemon peel garnish. In 2008, the Sazerac was named New Orleans’ Official Cocktail.

Where to get it: A guided New Orleans pub crawl through the French Quarter will point you in the direction of a well-prepared Sazerac, but guide or no, you won’t have to go far to find a tasty one! Out of the dozens of NOLA drinkeries pushing this famous drink, many enthusiasts agree that Arnaud’s 1918 makes the best Sazerac in New Orleans. This stylish French Bistro has been around for just under a century, and is located in the French Quarter at 813 Bienville Avenue. 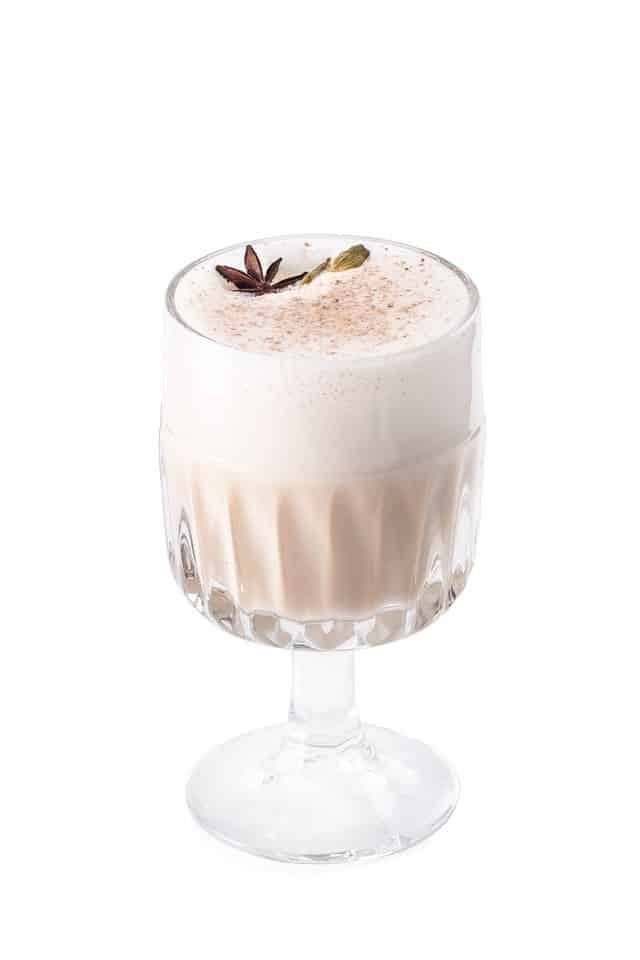 What is it?: While this delicious drink is closely tied to the holiday season, locals enjoy it throughout the year. Served with ice, the Brandy Milk Punch contains a mixture of powdered sugar, freshly grated nutmeg, whole milk, and of course, Brandy.

Where to get it: Best paired with Eggs Benedict, Brandy Milk Punch is an easy choice at Brennan’s. Brennan’s is a New Orleans icon that offers an innovative Creole menu inspired by Spanish and French ancestry. One of the “Best Restaurants in the World” by Conde Nast Traveler, it’s a must-visit spot. 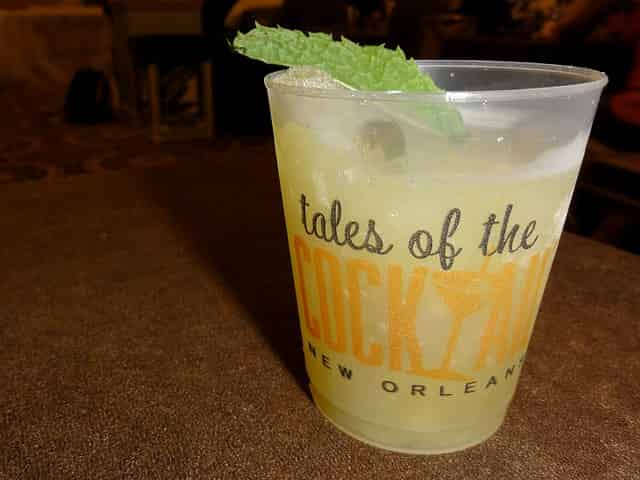 Absinthe Frappe is a popular drink in New Orleans. Image by wikimedia.org.

What is it?: Real Absinthe had been outlawed for years, but was made legal in the United States in 2007. Since the legalization of this infamous liquor, Absinthe Frappes have become popular and are some of the famous drinks to order in New Orleans, LA. The Absinthe Frappe consists of Absinthe, simple syrup, soda water, and mint leaves, and is served on the rocks.

Where to get it: Book a spot on one of Doctor Gumbo’s food or drink tours, and you’re sure to stumble upon this unique and delicious cocktail. Venturing out on your own? The Old Absinthe House opened almost 200 years ago, and is home to the original Absinthe Frappe (created in 1874 by mixologist Cayetano Ferrer). The Old Absinthe House still keeps many of its original decorations and artwork on display, creating a fun atmosphere made for indulging in classic cocktails. 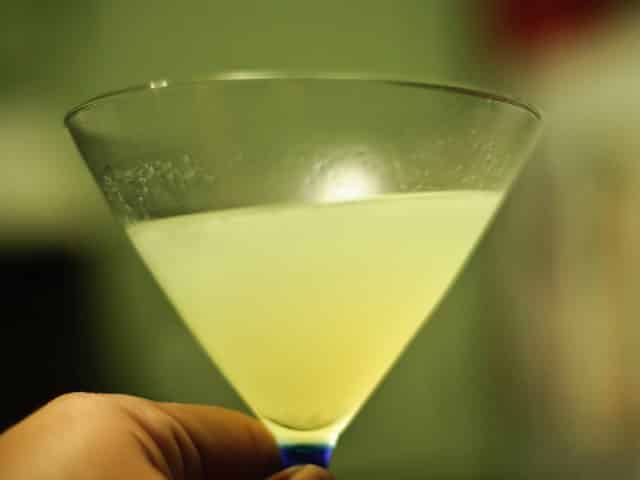 This cocktail gets its name from its vibrant green color. Image by Don LaVange via flickr.com.

What is it?: This frothy cocktail gets its name from its vibrant green color. Grasshoppers are made from a mix of creme de menthe, creme de cacao, and cream. As one of the more “flashy” drinks on the famous drinks to order in New Orleans list, the Grasshopper is served straight up in a cocktail glass, and can be ordered in multiple variations including the “Brown Grasshopper”, which calls for a splash of coffee.

Where to get it: One of New Orleans’ oldest and most distinguished restaurants is Tujague’s Restaurant located on 823 Decatur Street in the heart of the French Quarter. One of the most popular bars to experience history and hauntings, this is a place you definitely want to add to the itinerary. A former Tujague’s mixologist created the Grasshopper, and the restaurant has since popularized many of the city’s noted cocktails. Over the years, Tujague’s has hosted the world’s most notable figures including John D. Rockefeller, Ty Cobb, Dan Akroyd, and U.S. President Franklin D. Roosevelt.