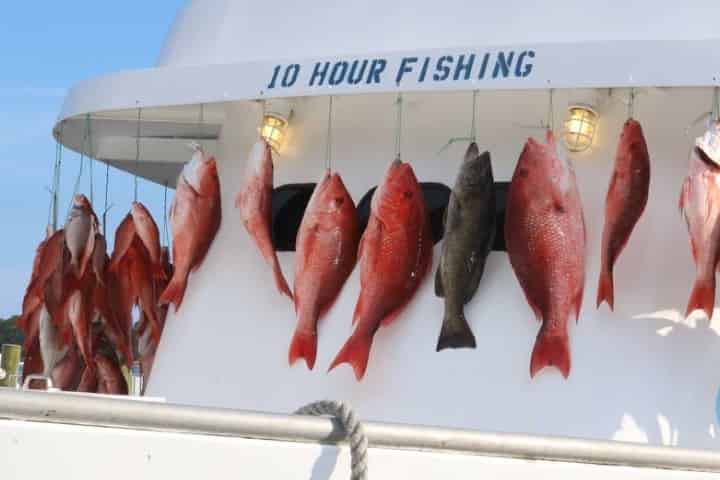 Coastal Florida offers some of the world’s best saltwater fishing. Anglers with both novice and advanced skill levels travel to the Emerald Coast hoping to snag a prized catch in the Gulf of Mexico. From sharks to sea bass, no fish is out of range when casting a rod and reel in the sunshine state. That’s why we created the Florida Red Snapper Season Guidelines for fishermen like you!

With any sport, there is always the “game-ender.” For baseball it’s a grand slam, for hockey it’s a hat-trick, and for Destin saltwater fishing it’s catching the coveted Red Snapper. The Red Snapper is so fun to catch, and the meat is so delicious, that it has become the focus of many Destin fishing charter trips.

How Big do Red Snapper Get? 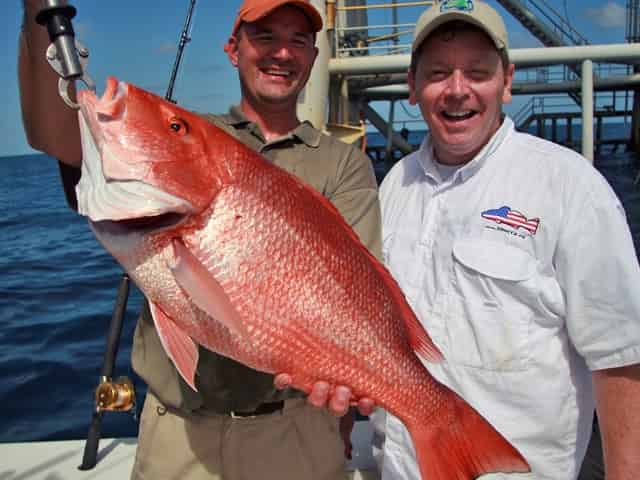 While a large Red Snapper could give a young angler (like the one in this fishing traveler story) a run for his or her money, they don’t grow quite as large as other game fish or popular table fare, making Snapper hunting the basis of many Florida deep sea fishing charters.

The typical Red Snapper grows to a maximum of around 25 pounds, with the largest Red Snapper caught in Florida weighing in at 46 pounds (caught off the Destin, FL, coast).

What to do After You Catch a Snapper - Storage, Filleting, Eating

If you catch Red Snapper on your vacation, you’ll want to freeze or fillet the fish as soon as you can. This ensures the meat is as fresh as possible. Here is how charter captains handle Red Snapper after they’re caught:

The best knives to use are specialized fillet knives for larger fish species like the Kershaw big game fillet knife.

Check out some awesome Red Snapper cookbooks on Amazon for inspiration!

How to Catch Red Snapper 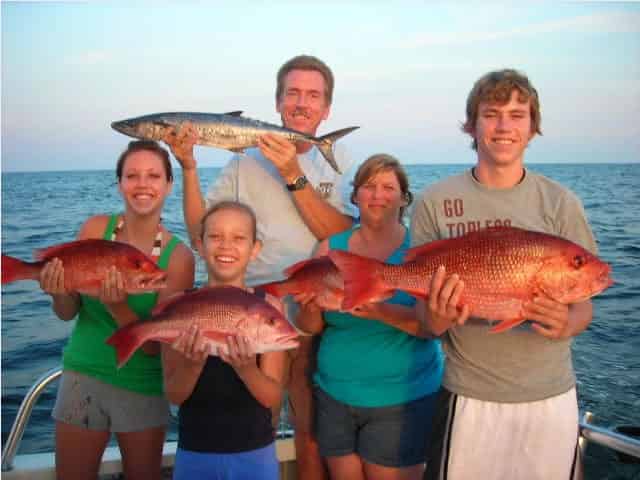 Red Snappers are typically found in deep waters, and like to hang out in schools near reefs, shipwrecks, and oil rigs. Your best chance at catching some tasty Snapper is to head out to deep waters, either in your own boat, or by booking one of the many fishing charters that Florida has to offer!

Towns like Destin, Florida, are especially popular for commercial charter fishing for some of the best species of fish to catch and eat like Snapper, Grouper, and Mahi Mahi.

Because of the value of Red Snapper, there have been State and Federal law restrictions placed on the species. In recent years, new laws were put into effect that will offer a much longer and more fruitful Snapper season to for-hire vessels, while tightening up on private vessels. Here is what you need to know about the 2022 Florida Red Snapper Season. 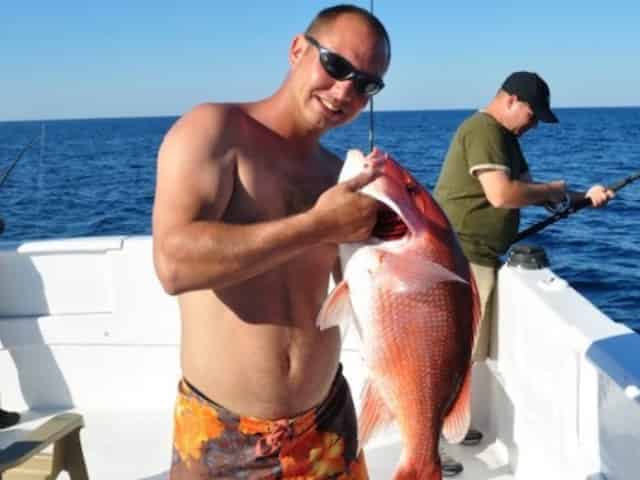 Over the years, Red Snapper has been overfished due to its inherent value. Florida lawmakers have since instituted certain rules to help in growing the population back to normal numbers. There are different laws for the Gulf of Mexico and the Atlantic, the following are strictly based on laws created for fishing for Red Snapper in the Gulf of Mexico.

There are also different guidelines for Florida Federal and State waters, which will also be covered below. The Florida Red Snapper Season Guidelines are broken up into Red Snapper size limit, gear rules, season length for private vessels and for-hire charters, and bag limit. 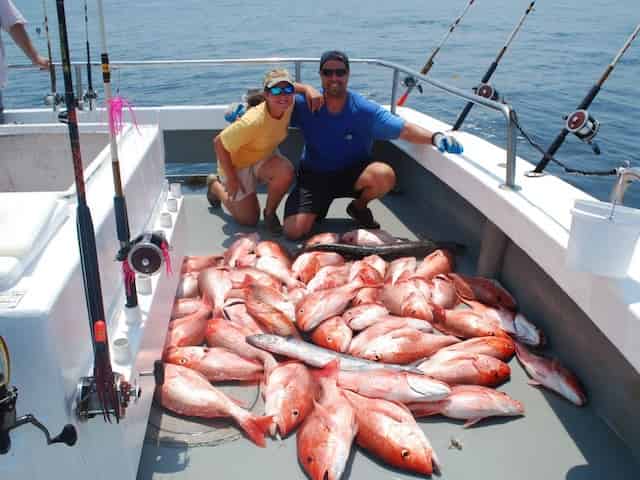 Large haul of Red Snapper brought in on one of the many deep sea fishing charters Destin, FL, has to offer

There is no weight minimum for Red Snapper. If you want to see how much your red snapper weighs, You can weigh the snapper you catch with a fish scale to see if you can break the record (46lb in Florida)! 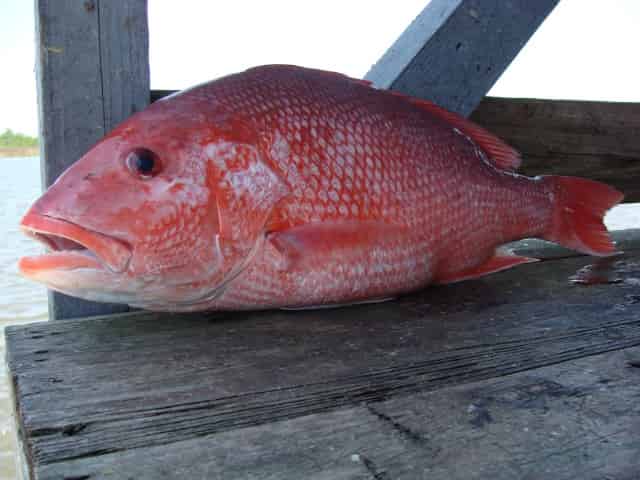 The Florida Red Snapper Season Guidelines will help you understand state and Federal regulations require all fishermen to adhere to certain gear rules when hunting for snapper and other popular fish species. These species include:

Required Gear: Circle hooks (non-stainless and not offset) must be used when using natural baits. If you’re searching for a complete list of gear to catch snapper, we’ve put together a list of Red Snapper essential gear for you online. For a full list of Red Snapper rules, visit Florida Fish and Wildlife Conservation Commission’s Recreational Regulations 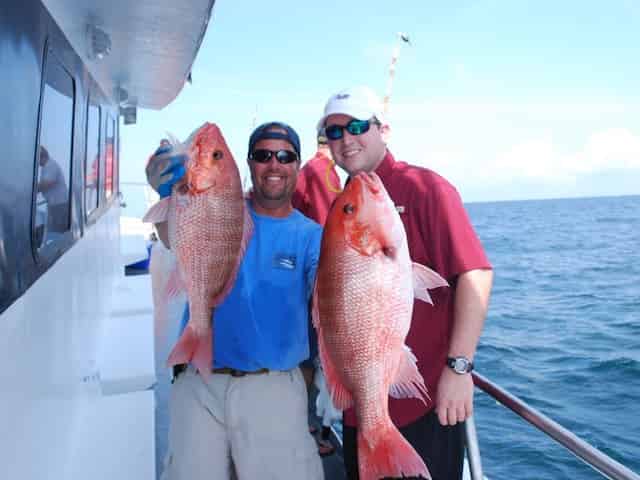 Whether you’re renting your very own fishing gear and heading out to sea solo, or hopping aboard a party boat fishing charter, there are guidelines to be aware of no matter how you choose to fish for this species

Florida State waters are from shore to 9 nautical miles into the Gulf of Mexico, and 3 nautical miles into the Atlantic. Anywhere past that is considered Federal waters. Florida Red Snapper Season lengths vary depending on where the fish is caught with a 2 per person daily bag limit (included in the 10 per harvester per day State Snapper aggregate bag limit).

State Season (Gulf of Mexico) - The 2022 season is June 17th through July 31st. The season will re-open the following dates:

Federal Season (Gulf of Mexico, Private) - The 2022 season is same as state season above

Federal Season (Gulf of Mexico, For-Hire Vessels) - The 2022 season is same as state season above

Where to Catch Red Snapper in Florida 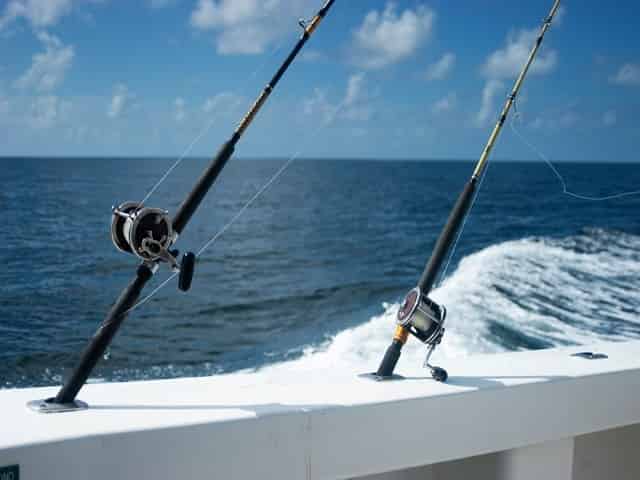 There are plenty of places to catch Red Snapper in Florida.

In America, Red Snapper can be caught in moderate depths in the Gulf of Mexico, and along the southeastern Atlantic Coast. Here are some locations where you can catch snapper in Florida. 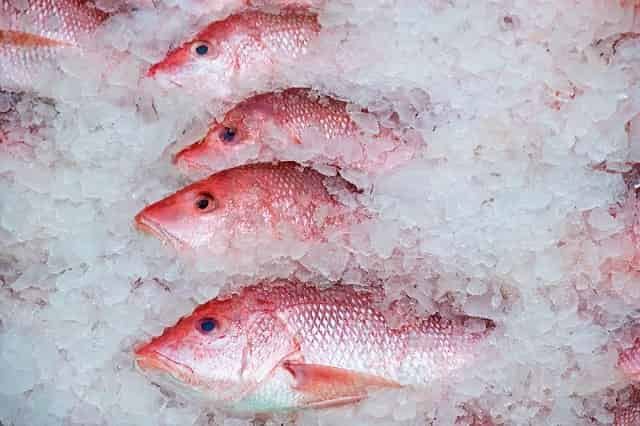 Pictured above is a row of fish on ice.

Ready to start your deep sea fishing adventure in Destin? Check out this recent TripShock blog for everything you need to know about Florida fishing licenses and more. Destin is a prime destination for red snapper fishing, with the best time for Red Snapper fishing running from spring through the middle of August. The best time to fish typically changes each year, but they come in big bunches when they arrive. There are fishing charters for all ages available in the Harbor, along with many other family activities in Destin, Florida. Typically, red snapper fishing on charter boats lasts for nearly 50 days. Charter boats wait until the official start of red snapper season to take you to popular spots to find them. Anglers often catch fish all year round.