Creole Queen vs. Natchez: Which is the Best New Orleans River Jazz Cruise? 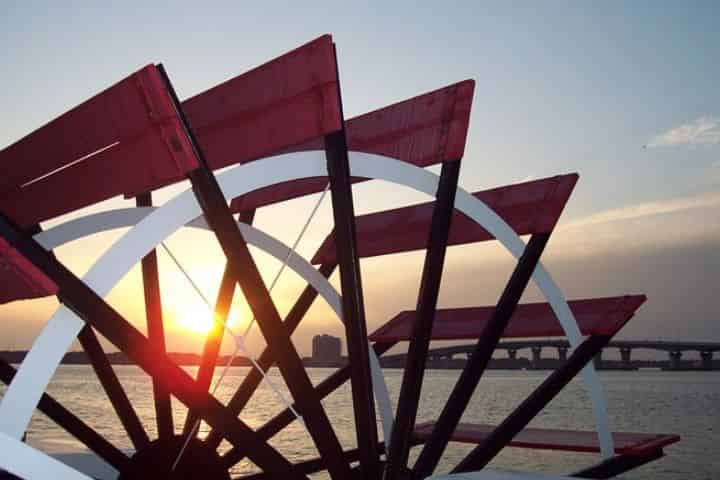 There are so many things to do when in New Orleans, from Carriage Rides and Tours to grabbing a beignet in the French Quarter, the options are endless. Few New Orleans attractions, however, are as magical as a midnight cruise down the mighty Mississippi. Throw some New Orleans jazz into the mix, and you have yourself one heck of an evening! One of our favorite ways to see the city in all of its glory is from a New Orleans River jazz cruise!

A New Orleans River Cruise is classic Big Easy, and is sure to make for an amazing night out. Once you hop on board of one of these fantastic and historic river vessels, the party really gets started! River cruises take you along the banks of the city at dusk as you take in the beauty, sights, and smells of NOLA from end to end! Two of the premier Riverboat Cruises in New Orleans are the Creole Queen and the Steamboat Natchez. Discover the similarities and differences between the two liners, and decide for yourself which is the best New Orleans River Jazz Cruise!

River Cruises are a tradition in NOLA. The giant paddlewheeler boats have been a common sight in New Orleans, LA, since 1800s and 1900s, when riverboats propelled by steam engines transported people and goods to and from towns along the Mississippi (guide.trustedtours.com).

Now adays, not all paddlewheelers you see in New Orleans are proppeled by steam. Some boats, like the Creole Queen, are powered by a diesel-electric engine. 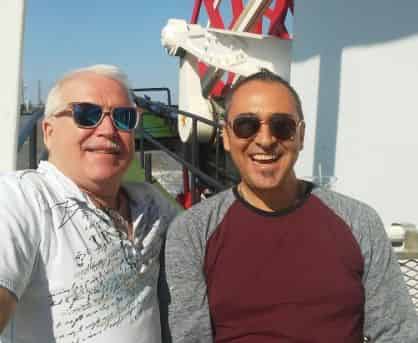 The addition of a new paddlewheeler to the Mississippi is met with celebration and fanfare! For centuries paddlewheeler river boats have helped define New Orleans culture as a place “laid-back livin on the river”, and have introduced that attitude through river cruises featuring spectacular sights, live jazz music, and mouth-watering dining with NOLA-influenced drinks and Creole/Cajun cuisine.

Operating year-round, River Cruises are a great option for something to do any time you visit New Orleans. We even added Jazz Cruises to a recent travel article as one of the best things you can do in New Orleans in March, May, and even June! But given that NOLA gets reaches extreme lows and highs in temperature, you’ll get the most out of an evening cruise when the weather is mild, like spring and fall. 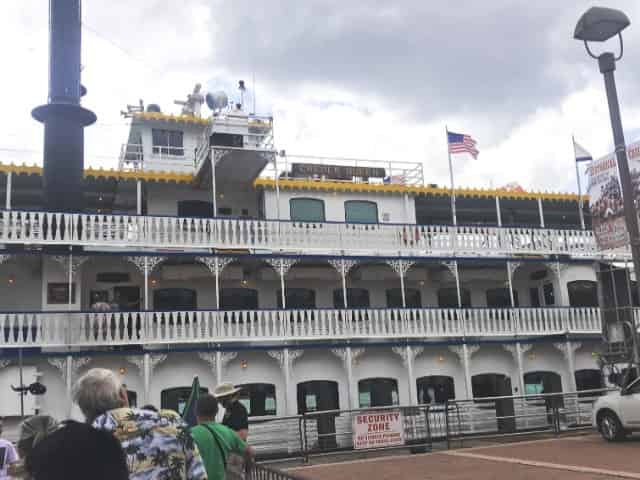 History of the Creole Queen

The Creole Queen is an authentic paddlewheeler whose maiden voyage took place on 1983. This 24-foot paddlewheeler may look old fashioned, but it is actually powered by one of the most advanced and fuel efficient diesel-electric engines around! The Creole Queen was modeled after the opulent river boats of the 19th century, with intricate architecture, stunning decor, and ornate private rooms.

Atmosphere Aboard the Creole Queen 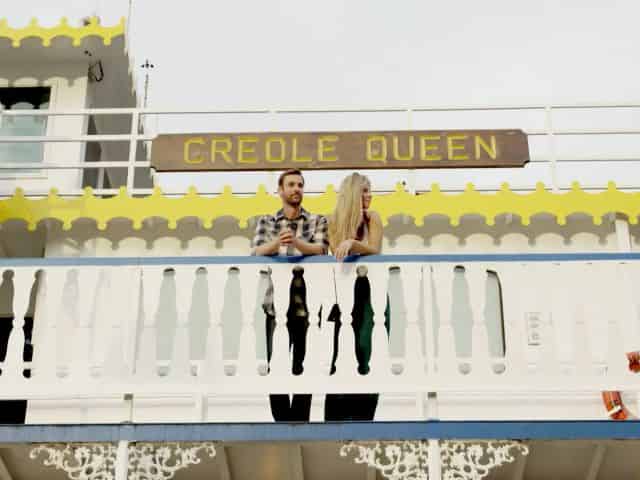 Climb aboard the Creole Queen and the first thing you will notice is the plush Victorian décor, the shining brass, and sparkling wooden parquet dance floors. A New Orleans jazz cruise pioneer, the Creole Queen boasts three different dining rooms and multiple outdoor decks that let you take in the air and city skyline! 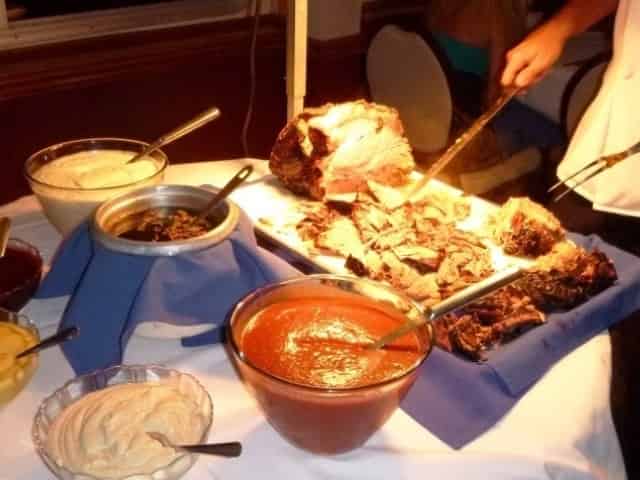 Enjoy a grand Creole buffet packed with all of the best New Orleans dishes you can think of including:

Menu items are subject to change by season and availability

After dinner, grab a drink at the cash bar, and get down on the dance floor to the spectacular sounds of Sullivan Dabney, Jr. and the Muzik Jazz Band! Here’s a short video of the band playing during a river cruise. 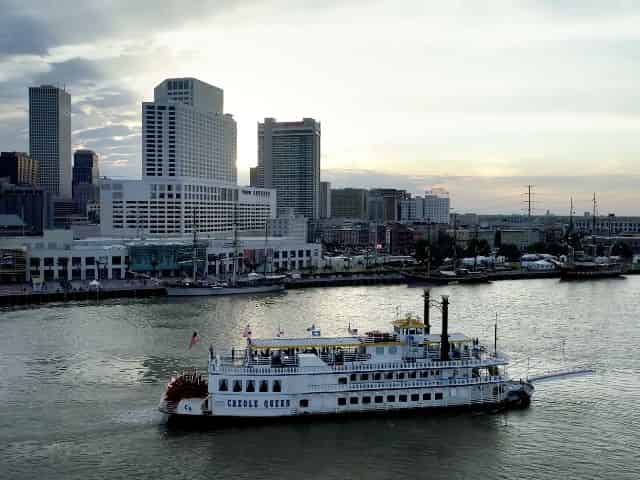 This 2 hour tour is brought to you by New Orleans Paddlewheels, Inc. 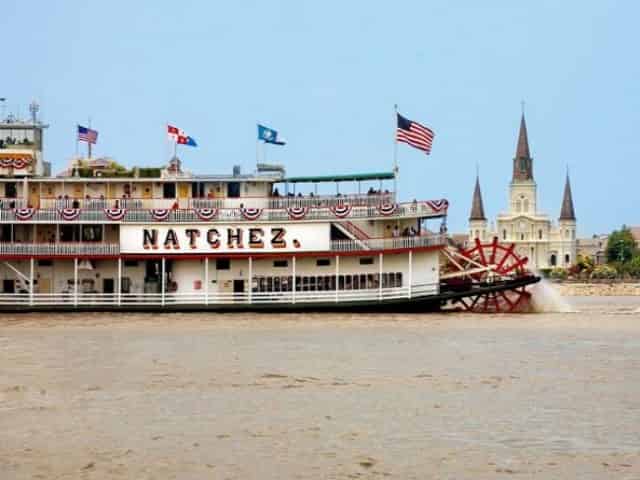 Steamboat Natchez passing by Jackson Square in the French Quarter

History of the Steamboat Natchez

The ninth steamer to bear the name Natchez, this legendary vessel was built in 1975 (steamboatnatchez.com). Her predecessor Natchez VI raced the Robert E. Lee in arguably the most famous steamboat race of all time. One of the two steam-powered sternwheelers left on the Mississippi, the Natchez is a historic marvel built with comfort in mind.

The Natchez has since held celebrities, noteable musicians, and even major political figures including President Gerald Ford who used the Natchez during his presidential campaign in 1976 (nytimes.com).

Atmosphere Aboard the Steamboat Natchez 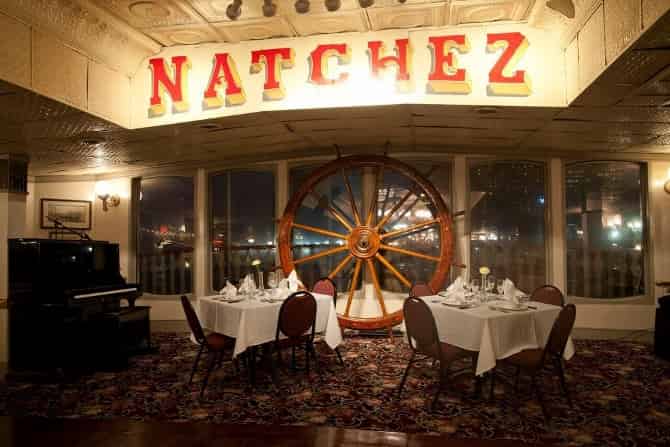 The Natchez is a beautiful vessel, providing a historic and elegant atmosphere with stunning views of the city

Hop on board and her gothic features will immediately transport you back in time! Stroll the beautiful ship in all of its glory, including outdoor decks and seating. Check out the museum-quality engine room and admire the steam technology and intricate pipework that delivers the power to the paddlewheel! Enjoy breathtaking views of the city as you cruise the Mississippi and enjoy a night of great food and music. 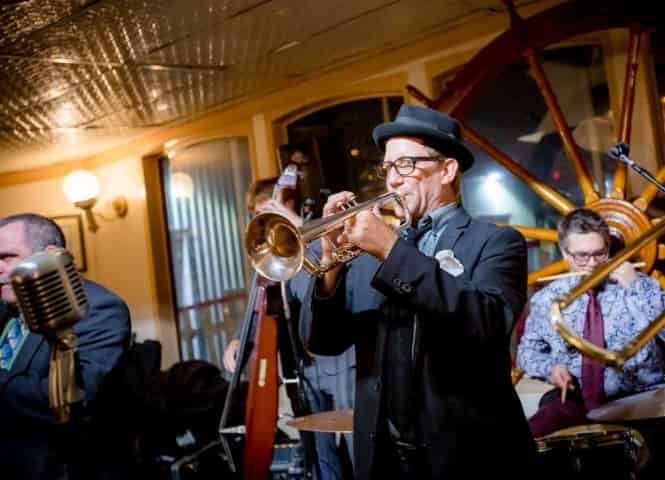 New Orleans is known for its Jazz music, and that’s no different when aboard the Natchez

Join the Grammy nominated Dukes of Dixieland as they rock the ship from point A to point B and feast on a casual buffet-style dinner with something for everyone including:

Menu items are subject to change by season and availability

After you get your fill at the buffet, enjoy a drink at the cash bar, do a little dancing, but don’t forget to save some room for the famous Paddlehweeler Bread Pudding with white chocolate sauce! 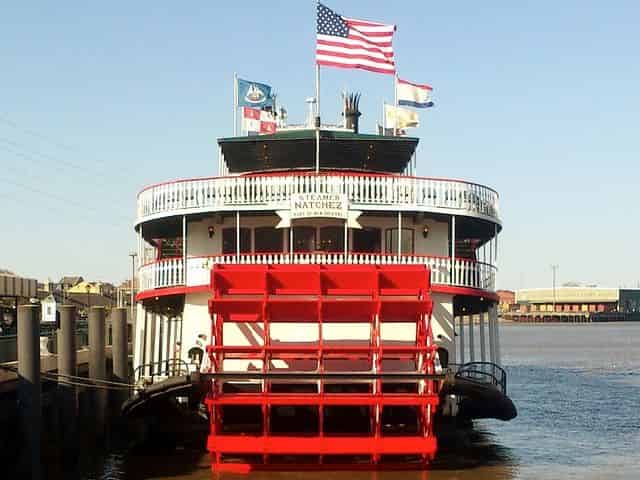 This 2-hour tour is brought to you by the New Orleans Steamboat Company. 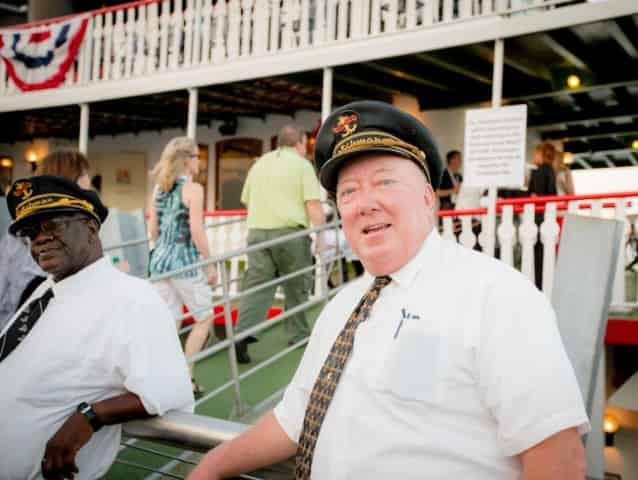 Whether you’re looking for a romantic activity for two in New Orleans or an epic girls’ night out, a cruise along the Mississippi is great for any occasion.

These two cruises may have a lot in common, making it even harder to choose one over the other. Here is a side-by-side comparison of the two cruises:

Information in this table is subject to change. Before booking, please reference a TripShock.com listing or call TripShock at (850) 424-5125

Now that you’ve compared Creole Queen vs. Natchez, which do YOU want to experience? Both are great choices, but we’ll leave it up to you to discover which boat offers the Best New Orleans Jazz River Cruise! If you want to learn more about Natchez and Creole Queen, or you’re ready to buy your tickets online, you can find the lowest prices on NOLA Dinner Cruise tickets online with TripShock.

8 Reasons to go on a New Orleans Riverboat

Hop aboard an antique steamboat paddlewheeler on the Mississippi River for a cruise consisting of authentic New Orleans staples like freshly prepared creole meals, live jazz music, thrilling historic tales, and scenic views! For those looking to experience the first-hand excitement of a New Orleans boat cruise down the Mississippi, here are 8 Reasons to go on a New Orleans Riverboat.

Booking a New Orleans steamboat tour online is the quickest, easiest, and cheapest method. Two of the main tour providers are Steamboat Natchez and Creole Queen, both offering cruises on the Mississippi, along with food, drinks, and live entertainment.

Websites like TripShock.com or neworleanspromocodes.com offer New Orleans dinner cruise coupons for up to 10% off, and maintain special group rates for parties of 15 or more. Whether choosing to partake in the Chalmette Battlefield Tour aboard the Creole Queen, or dance the night away on the Steamboat Natchez Evening Jazz Cruise, find great deals and up-to-the-minute availability online.

Which Steamboat Tour Should I Book?

If you’re not sure which cruise to experience, don’t fret! Both the Steamboat Natchez and Creole Queen offer unforgettable memories that will last a lifetime.

Most major boat tours down the Mississippi River are located within waking distance of the French Quarter, including the Creole Queen, which boards at #2 Poydras St. Riverwalk Dock, New Orleans. Before boarding the boat, take time to explore the area. It’s not hard to find fun French Quarter things to do!

Hit the famous Cafe Du Monde across from Jackson Square for a quick meal of coffee and beignets, or peruse Bourbon Street for that perfect band or street performer. REMINDER: Guests should be at the docks at least 1 hour prior to departure time.

Boarding is an exceptionally grand experience! Riders are greeted by friendly, uniformed attendants waiting to either help diners to their tables, or assist passengers in finding a desired location.

The excitement builds while boarding as creole music and the enticing smell of cajun cuisine fills the air. Some steamboat tour providers even offer live concerts in the boarding area featuring local performers!

You won’t believe the sights you’ll see from a New Orleans steamboat! The views on the top deck, however, are amazing and unparalleled. On your tour, you can enjoy breathtaking views of the city including:

During evening cruises, experience the city at night, a stunning view perfect for romantic outings. If looking for exceptional New Orleans Photo Ops, the top deck of a New Orleans steamboat is the place to be!

New Orleans steamboats, including the Steamboat Natchez and Creole Queen, are both considered historical landmarks. The Steamboat Natchez was built in 1925 for the steamer CLAIRTON, and features a fully-functional steam-engine room that is viewable in a museum-quality exhibit.

The outer decks of the Creole Queen are adorned in authentically patterned wrought-iron trim, with the interior accented with antique decor including Victorian-style draperies and wooden parquet dance floors. Every inch of a New Orleans paddlewheeler is packed-full of history!

New Orleans is known world-wide for eclectic and downright scrumptious food. Trying New Orleans’ delicious cuisine will top any vacationers’ must-do list, which is why the most memorable part of a New Orleans steamboat tour may be the delectable dining!

Buffet-style dining allows for a large sampling of creole cuisine. From red beans and rice to a dessert of bread pudding, diners will know why New Orleans is nicknamed the City of Chefs after the first bite!

Food comes optional on most New Orleans steamboat tours, but is highly recommended for the full cultural experience. Choose to eat directly after boarding, or take some time to drink and dance before digging in!

Order up beer, wine, or an original NOLA cocktail during a New Orleans Riverboat Cruise. Sip on one of these genuine New Orleans cocktails or beers:

New Orleans is known for elegant cocktails that are as uniquely flavored as they are tasty. What better place to enjoy one of these luscious libations than aboard an authentic steamboat?!

8. Dancing the Night Away to the Sounds of New Orleans Jazz

The final memorable moment from a steamboat tour in New Orleans, LA, has to be the live jazz entertainment! Dance the evening away alongside dozens of joy-filled passengers before calling it a night.

New Orleans Jazz is a traditional style known as Dixieland Jazz. Such popular entertainers as Duke Heitger’s Steamboat Stompers and the Dukes of Dixieland are sure to entertain with lively tunes reminiscent of turn-of-the-century New Orleans.